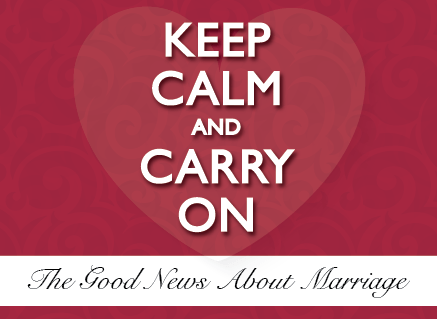 Keep Calm and Carry On: The Good News about Marriage!

Winston Churchill’s tenacious spirit was undoubtedly what inspired the British government to produce this famous morale-boosting poster from World War II “Keep Calm and Carry On”. It was created to steady the nation against the reoccurring, formidable and crushing attacks and pending invasion by enemy forces. Its hope-filled, courageous tone can still serve to anchor us against another daunting enemy—that of the very negative and unnerving statistics about the state of marriage today. Stay with me. You’ll see there’s reason to keep calm and carry on in your marriage as I debunk a number of myths.

Let me first start by setting the record straight. I am an honest man and I believe a genuine apology is in order. I am haunted by the fact that as a leader in the marriage and family field, I too have parroted these two common notions as true. I have, like many others, repeated what I now am relieved to know to be false. I spoke publically that

I know you’ve likely heard similar stats reiterated from other reliable sources as the truth about where marriage is at in society and within the church.

I am sorry. We were wrong. I was wrong.

I had mistakenly assumed the reliability of these marriage statistics. In response, I determined to boldly challenge couples in my sphere of influence to take the covenant of marriage seriously warning of the very slippery slope into failure. My goal was to give the tools and tips needed to get every couple I could inspire onto the winning half of successful marriages. I know, what was noble in intention was still very discouraging. Can you see with me how I had left people with the depressing impression that their marriage had only a 50-50 chance of making it?

There’s more. I began operating with the understanding that Christian marriages failed at the same rate as those outside the church. After all, don’t we all trust Barna Research? I would speak of this sad truth as the topic would arise and I am guilty of perpetuating a very negative myth. I would strongly express the need for people to live out that faith in the four walls of their home. The challenge, though well intentioned, left people wondering that if this stat was true, than what difference does God really make in a life, a marriage and a home.

In my heart, I wondered the same. This stat was disheartening, but with determination, I would rally around the faith and marriage flag undaunted. Yet in my gut, it didn’t make sense. I didn’t see anywhere near a 50% carnage rate in marriage in the faith circles I was in. This high divorce rate in the church didn’t make sense to me. I thought it must be really bad elsewhere. I repeatedly surmised that while the divorce rate in our culture was high, it still didn’t jive from my faith perspective that God in a marriage really changes things. I felt that knowing God really did make a great difference.

The Good News is that He does.

What I will share here is heavily dependent on Shaunti Feldhahn’s fabulous research revealed in her book, The Good News about Marriage: Debunking Discouraging Myths about Marriage and Divorce. It is the only book that in over 20 years I have read twice (other than my Bible of course). Space won’t allow me to give all the justification behind her well-researched conclusions but for those interested, you can get the book and read the brilliant documentation and encouraging details for yourself.

Understanding the Good News about Marriage

TRUTH 1: The actual divorce rate has never been close to 50 percent!

Instead of 1 in 2 marriages ending in divorce, it’s closer to 1 in 5. The average first marriage divorce rate across the general population is around 20%. If you take in all marriages, (2nd, 3rd and more) the divorce rate is still only around 33–35%. So, if you are tracking with me it means that couples getting married today have an 80% chance of having a lasting and satisfying marriage! Feldhahn says, “imagine the difference in our collective unconscious if we say ‘most marriages last a lifetime’ rather than ‘half of marriages end in divorce.’”

NOTE: This is where the myth of a 50% divorce rate originated. With ‘no fault’ divorce came a huge increase for a few years in the number of divorces as countless couples ran to the courts to more easily end unhappy unions. With this growing increase through the 1970–80 decade came the PROJECTION that if the trend continued, we’d soon see a 50% divorce rate. It was PROJECTION only not the actual statistic. Sadly, this projected 50% divorce rate took on a life of its own. It went from being a point of conjecture to a widespread assumption to a perceived fact. The divorce rate has never ever hit 50%—try 35% at best.

TRUTH 2: The divorce rate is declining and has been for over 35 years.

The failure rate in marriage peaked in 1980 following the decade of the “no fault divorce” laws sweeping across almost all the states and later into Canada (First state was California in 1970 with all but 2 states following suit by 1983. In Canada, 1986). Divorce became so easy.

TRUTH 3: Most married people today (88%) enjoy being married to their spouse and given the chance, would do it all over again.

Not only do most marriages make it, they do more than survive. They thrive and describe themselves as happy in their relationship. Research further shows that most of those couples that aren’t happy would be if they stayed committed during hard times for five years.

Every study ever conducted on faith’s impact on marriage has found that weekly church attendance alone lowers the divorce rate by between 25 & 50% depending on the study. Couples who live their faith together and practice it through regular reinforcement within a church community generally have strong and lasting marriages. Thus, research does reveal that having a real and engaged faith does impact your marriage in a fabulous way with a divorce rate as low as 10–15 %.

NOTE: The myth of the divorce rate being as high within the church as outside it originated with a 2001 Barna study that showed that professing Christians had a same divorce rate as non-Christians. The researchers were studying those who professed to hold Christian beliefs not those who went to church. They analyzed what people said they believed and its relation to marriage. What people say they believe but don’t practice wasn’t taken into account. There are a lot of people in the general population (especially in the US) that say they believe the Biblical truths but it doesn’t affect their life. The gap of misunderstanding was the difference between belief and practice. Those who attend church regularly and have the same faith commitment as their spouse have an incredibly higher success rate in marriage. The divorce rate is NOT the same in the church as outside it—it’s half as much.

Embrace the Good News about Marriage

Donalyn and I got married young. In the 1970’s, this was much more common than it is today. The odds aren’t good for teen marriages then or now (we were 19). But my mother made a comment to me that I have never forgotten. She said, “Dave, I know you and Donalyn are young getting married, but you will make it because you have the LORD.” I hung onto those words when we had seasons of marital difficulty. I truly believed and sought to live out that God does make a difference in a life, a marriage and a home. An active faith is a transforming faith—marriage included. Knowing and following God’s plan radically does make a difference.

So where should we go from here? Here are three suggestions:

Let the truth sink in. The divorce rate is not—I repeat NOT at 50%. For first marriages, you have an 80% chance of being with your spouse for life. Further, God does make a difference in your marriage if and when you practice your faith together with the divorce rate within the church being as low at 10-15%.

Tell someone. Refer to this article in your discussions. Talk about it within your family. Pass it on to the leaders in your church. Buy them the book! Go to DoingFamilyRight.com and share this article on Facebook. Help debunk the negative myths that too many are holding on as true.

Rest in knowing that YOUR marriage can make it even if you are going through a tough season. Don’t live another day under the misunderstanding that when facing tough times you are on the verge of divorce. Garbage. Stay committed. Work through your issues. I have yet to see a marriage fall apart where both husband and wife are soft toward God and His plan for their life and marriage.

Finally, Christian marriages—keep calm and carry on! Following the Lord does make a huge difference on both the satisfaction and longevity of your most important relationship. I’d love to hear from you! Leave comments at our website: www.doingfamilyright.com

Also available: Listen to our podcast on this topic: #63: The Good News about Marriage or watch Dr. Dave’s Sunday Sermon Video: Keep Calm and Carry On.