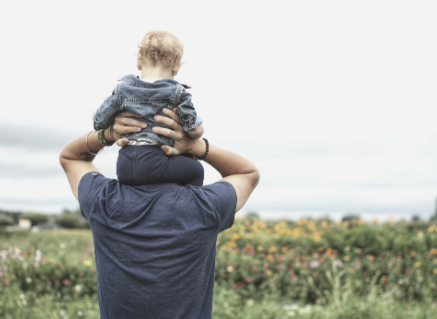 Life often comes down to collection of snapshots in an album. They don’t tell the whole story; so much goes on between each captured Kodak moment. But photos, like memories, do capture the highlights that permanently shape your remembrance of your past – and thus, the shaping of you. Let me share part of my album.

As a boy, I wanted to be like my Dad. Most of us do. I was awestruck by all he knew; he could answer any question it seemed about bees, motors, fire, baseball – you name it, he knew it. I was amazed by how strong he was; he lifted things with ease like the couch, tires, and even my bed. I was enthralled by his attention. Imagine, he took time away from his big person’s world just to be with me. I loved the chance to be around Dad. He had no idea of how much I watched him and how much I admired him.

These are some of my snapshots. They tell a story of a subtle but deep influence.

Like most prairie kids, I grew up playing minor hockey on outdoor rinks. Some days, it was so cold that the ice would crack and shift. You could actually trip over the ridges. My Dad didn’t coach but he was there – tying skates and all. On one of those crazy cold days, I have this distinct memory of my Dad rubbing my frozen toes as I cried. He assured me it would get better. His faithfulness to back me showed in the spring and summer too. He would let me pitch to him for 10-15 minutes almost every noon hour. He was always there for me. He was a man of consistency.

One of my most powerful memories of Dad was after I understood the meaning of money – likely around age 7 or 8. The lady at the Sear’s checkout gave my Dad too much change. After he started to walk, his calculator mind revealed her oversight. He turned and gave her back the extra. That move didn’t make sense to me; after all, it was her mistake. He said that if I knew and kept it, then it would be just like stealing. I saw this honesty in many areas of Dad’s life. His word was his word. A handshake was enough. He never lied, ever! He was a man of integrity.

One Saturday, while shopping with Mom and Dad, I became curious of some bizarre behavior of my father. When we were walking down Third Avenue (a busy downtown street), he would repeatedly change sides with mom – always moving to the side closest to the traffic. When alone, I asked him about it. He said, “Men always walk on the outside – to keep their women safe.” It dawned on me. This was nothing new. He was always a gentleman. He looked out for others, held doors for people, and it was always, “ladies first”.  He was a man of chivalry.

As a teen, I have a vivid memory of Dad’s explanation of Mom going through menopause. I laugh now thinking about it. I asked why she was becoming so moody – like “what’s with Mom?” After all, this once happy, effervescent lady was turning into a grouch right before our eyes. In his kind way, Dad said, “It’s her Time of Life” (like I was supposed to know what that meant) and he called me to be patient with her. He was. But that was Dad’s way. He treated Mom so good. He always spoke well of her. He was a man of graciousness. 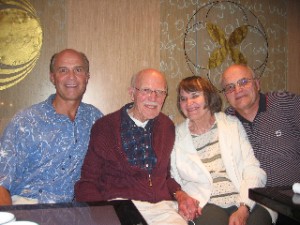 Coming home from football practice one Tuesday, I got a snapshot of my Dad that I will never forget. For over 30 years, my mother held a Good News Club for neighborhood kids (often 20-25 of them) to help them know God’s love. To escape the clamor of the kids leaving, I slipped into our den. There was Dad, still in his trench coat, suit and tie. He was on his knees at the couch with one kid under each arm. He was praying with them. I listened without a sound. This sales executive was not too “big for his britches” to help little kids pray. I absorbed the moment. Then I slipped out before they knew I had been there. It was clear. Children were important. God was important. Dad’s faith was real. He lived what he believed. So much of his life reflected this snapshot. He was a man of faith.

My album is so full of amazing memories of my Dad and what his life was all about. He shaped me as well as my views of ‘Fatherhood’. As I turn the pages of my mind, I recall more significant moments that hold the same richness and carry the same impact. His open hand for giving revealed he was a man of generosity. His living in a 680 square foot home for over 50 years showed he was a man of contentment. His willingness to serve on the board or committee of non-profits screamed he was a man with a cause. There are still many more snapshots.

I pray to God that I resemble my Dad.

Take a moment to celebrate your Dad this month. Create another memory and add to your life photo album. Why not even get your picture taken with just you and him? It’ll be a keeper – a snapshot of fatherhood.