Marriage: The Power of FAITHFULNESS 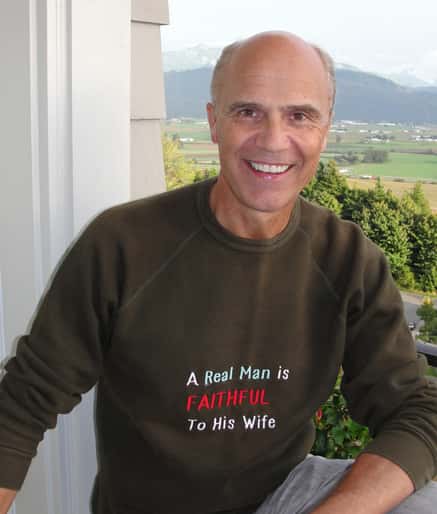 A few years back, I got inspired to go against the flow of culture and make a statement. I had a sweatshirt made with lettering on it, “A real man is faithful to his wife”. I wore it proudly. Interesting though, when I picked it up from the stitching store I found out that the owners had put it in the display window because they had liked it so much! I was tickled that my statement was so appreciated.

Problem. I soon discovered that they honestly thought it was a joke—like a great gag gift for a stag! While I was paying for the work, the two guys in the store were howling with laughter about what a great scam this was and then were cut short in disbelief when they found out that it wasn’t a prank. The single girl working there said, “That is so sweet. You guys are sick. I want to marry a man like that one day.”

What does it mean to be faithful? Most of us think as we are holding the hand of our fiancé that we are the type of people who will stay committed through thick and thin. It’s part of most vows—the “for better for worse” idea is romantically parroted at weddings with the assumption that our new mate can be trusted. The truth is—faithfulness is hard work.

I want to help you understand and experience the benefits of staying fully engaged and committed to your spouse for the rest of your life. There will be days that you may need to reread these words to strengthen your commitment through a rough spot. Before we look at the benefits of loyalty, let’s look at why faithfulness can be such a challenge.

Why does marital exclusiveness seem like a nostalgic notion in so many minds?

Faithfulness itself is not a popular concept in today’s version of marriage. After all, “what happens in Vegas—stays in Vegas!” Popular relational philosophy implies that some sense of messing around is understandable—partly assumed. That’s often why there are a growing number of prenuptials written and more couples try living together in a trial marriage. It seems like it’s not a matter of “If” there might be a marital breakdown but “when”.

Further, in my lifetime, the connotation of the word “divorce” has changed from a dark, difficult failure to an unfortunate but necessary and understandable choice. Being divorced went from being like a swear word—a serious stigma—to being an everyday by-word – a common state. Divorced just happens.

Vows have changed too. They have gone from being “as long you both shall live” to “as long as you both shall love”. The assumption is that love may only last so long and that marriage isn’t necessarily permanent. Relationships don’t and won’t likely last. The perception is “don’t be a fool—get out if it’s not working.”

Faithfulness is also an uphill battle because current media trashes marriages too. TV shows, movies and more portray the commonness of hooking up outside the marriage and then the subsequent necessary breaking up of the marriage. The norm is cheating. Hollywood stars flaunt and almost boast of what I call “minute marriages”. Marital faithfulness is mocked. Affairs are seen as unavoidable and understandable. Loyalty is almost seen as naïve.

And think—I am trying to help you understand the power of faithfulness in marriage. This is a really challenging world when we live with the prospect and desire for a permanent bond. Like I said, faithfulness is hard work. You’re going against the flow.

Back to the sweatshirt—you know the “a real man is faithful to his wife” one. Let me tell you another story. Common thought on the topic couldn’t be illustrated any better. One time when I was wearing it on a trans-Canada flight, a couple of the flight attendants noticed it as I entered the plane. A discussion obviously had ensued about the shirt for when these stewardesses walked by my row, they were all slowing down to take a good look at it for themselves.

Some time after our drinks were served, one attendant stopped, leaned over and said in a tense, somewhat angry whisper, “There’s no such thing as a faithful man!” and then marched away. A bit later, another flight attendant who obviously had liked the message of the shirt leaned over and asked me if I was married. I said “happily so”. Then she proceeded to ask if I had a brother. Their combined reaction is so typical of our culture. So many have been hurt by someone not being faithful to them but all people truly want genuine faithfulness in their most important relationship.

Oh, by the way, I had a similar sweatshirt made for my wife. It read, “a real woman—fully foxy but forever faithful”. She said she would only wear it when I wore mine.

So here are the major reasons why there is such power in faithfulness. You’d be wise to use them to strengthen your resolve to be loyal to one person for the rest of your life.

My Top 11 Reasons for Choosing to be Faithful in Marriage

1. Faithfulness reflects your commitment to God. His plan couldn’t be clearer. We are called to live what we believe in our home first. Couples that stay committed for life—plain and simple—honor God and His ways. The Bible is straight up on this—God disapproves of divorce (Malachi 2:14-16). Faithfulness is a sign of putting God first. Enough said.

2. Faithfulness is an extension of the vows made on your wedding day. Marriage is a covenant between two people—like a contract. Giving your word matters. Commitment builds trust.

3. Faithfulness allows for a friendship to grow deeper over time. There is such a rich history with your spouse as with every year, there is an exclusive witness to your life—up close and personal. Your spouse shares the journey every step of the way. This kind of companionship done right is phenomenal.

4.  Faithfulness brings such freedom and confidence. There are no secrets to hide, no need for covering tracks and on the other side, no worry, jealousy and need to check. One aged divorcee looking back said, “If I had spent as much time working on my marriage as I did on hiding my affair, I would have had a great marriage and still be in it today.”

5. Faithfulness prevents such turmoil of the heart. Those who have been through a split up have experienced the massive amount of emotional pain. Nobody wins in divorce. Avoid the guilt, separation, frustration, tension, distance, regret and confusion. Staying faithful allows you to stay healthy—emotionally and physically.

6. Faithfulness is a gift to your children. Your consistent love for your spouse deposits a strength, stability, and security into their lives. This loyalty brings a sense of permanence to your family. Kids thrive—research confirms it.

7. Faithfulness prevents a legacy of marital failure. With real commitment, there’s no risk of the broken family. Adult children of childhood parental divorce have a higher risk of getting divorced themselves. Don’t pass on a legacy of defeat but one of victory.

8. Faithfulness gives such an example to your children of how to do marriage right. The most permanent premarital preparation is what your kids witness in the 20+ years of living at home. Your relationship becomes the credible pattern to follow. They will be committed to in turn make their marriage great

9. Faithfulness prevents financial chaos. People overlook the incredible economic upheaval of a separation and divorce. Between the setting up of two homes, the cost of sharing kids, the lawyers and the loss of productivity and unity, the toll on the mutual pocket book can be massive.

10. Faithfulness lived out keeps an ongoing respect of the institution of the family in our society. There are too many broken homes. Work to stem the tide of family disintegration. Each family breakdown causes a ripple effect as other families in turn split up as a result (at least two).

11. Faithfulness as a precedent drives you to keep working on your marriage. When you chose that divorce is not an option, you have an ongoing commitment to not only make it work but to make it better. Being faithful is hard work but so incredibly worth it when you arrive together at a great and satisfying marriage. That’s God’s plan.

“For this reason a man will leave his father and mother and be united to his wife, and the two will become one flesh’? So they are no longer two, but one flesh. Therefore what God has joined together, let no one separate.”   Matthew 19:5,6

See all of our online resources here: Faithfulness

Doing Family Right: helping you maximize your most important relationships—spouse, family and God.