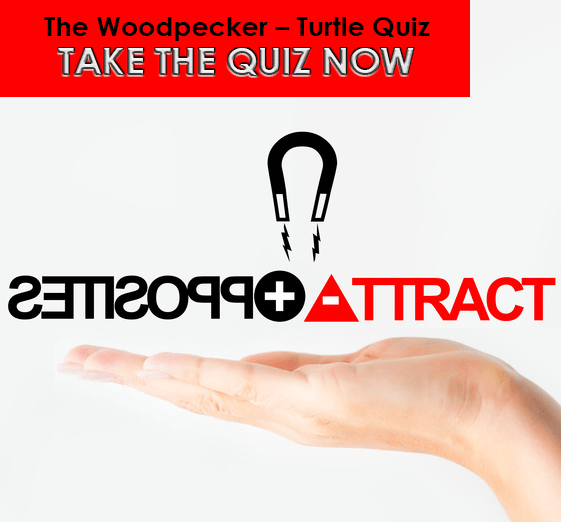 You’ve likely heard someone make reference to the celebrated book by Dr. John Gray, “Men are from Mars and Women are from Venus”. In it, Gray helps people to understand male–female differences. That is significant. We don’t easily understand the opposite sex and how differently they think from us. But there is something more going on in the mate selection process than simply being attracted to the opposite sex. Understand this and improve your marriage almost instantly!

People are also drawn to—powerfully attracted to—someone who has personality differences that compliment who they are.

Research consistently shows that opposites do attract. Like a moth to a porch light, we are charmed by those who can fill in our gaps; who is our compliment. God knew what He was doing when He wired people to be enticed to their counterpoint. We call these alluring differences personal style. It is how a person looks at and approaches life.

This opposite attraction is a good thing. Our personal style differences combine to make us stronger as a couple than when alone. No one is redundant. It’s like you complete each other. Relational equilibrium in a marriage can be achieved when opposite people come together and live to value these uniquenesses. Through the respectful merger of two very different people, we have a better chance to form balanced decisions, make sensible purchases, and even raise well-adjusted kids who are a mix between a very different but complimentary mom and dad. Again, this is all part of God’s plan.

While we concur that opposites attract, have you ever, like me, found that opposites can attack? For years I wondered why Donalyn and I could butt heads so easily and so often. When do our personal style differences become a hurdle? You likely have experienced similar tensions.

The truth is, you love and are attracted to your mate’s uniqueness ‘most’ of the time. But remember, opposite means just that—OPPOSITE—differing views, conflicting perspectives, opposing opinions, contradictory approaches, and even clashing wills. That’s where the rub begins. Our personal styles of approaching life—clear dispositional differences between you and your partner – though attractive initially, can easily create marital havoc later unless better understood.

Check out these examples of personal style differences to help grasp how opposites could both attract and attack. At times, the traits that were once a draw to you can become a drain on you. You will likely see some of your relational styles listed here:

By reading this list, we can begin to see why opposite styles sometimes attack? Our way of approaching life makes sense to us and thus becomes the “right” way doing things. As a result of our experience, mixed in with a little (or a lot of) selfishness, stubbornness and insecurity, we tend to want to conquer, control or compete with our spouse instead of trying to compliment, collaborate and commend each other.

Understanding each other’s personal styles is key to developing a harmonious marriage. Knowing who you are and how your approach life can shed real light on the dark side of how you interact. As you’ve experienced I’m sure, style differences show up so clearly when disagreements and conflicts arise between you.

We have found over the years that personal styles simply put can reflect two ends of a continuum. To help couples better understand their mates, we have developed the personal style self-test called “the woodpecker-turtle quiz”. This two-critter continuum reveals how a person generally approaches life and relationships. It’s the key to appreciate your partner’s interaction style.

Understanding their style will greatly enhance your ability to solve your disagreements in a healthier way. Remember too that the two extremes are not wrong just different. And it is not a male–female thing either like men are woodpeckers and woman are turtles. We have found a good balance of men and women at each end of the continuum.

Let’s look closer at the two critters at the opposite ends of the personal style continuum.

The TURTLE – Here’s a snapshot of the hard-shelled spouse. They are more passive and cautious, will mull thinks over, tend to withdraw, will avoid a fight, are more restrained, think first, are willing to let things go and often downplay the issues. They do “Turtle” to avoid conflict and tension and hide!

The WOODPECKER – Here’s the snapshot of the hard-nosed spouse. They are more aggressive and direct, are impatient, tend to press in, will start a fight, are more outspoken, speak first, don’t let issues go and can magnify the issues. The do “peck” and create conflict by pestering and pursuing.

FACING THE DARK SIDE IN ALL OF US

The dark side of a turtle is how they use their hard shell to put up a wall. They turtle to protect themselves. This defensiveness causes them to withdraw emotionally and sometimes walk away physically. The stalling and stonewalling doesn’t bring a solution but rather creates isolation and distance in the relationship. Turtles should agree to talk things out.

The dark side of the woodpecker is how they use their beak as a battering ram. They peck to get their point across. Their persistence in the discussion pushes their spouse away usually out of either fear or exasperation. Insistent woodpeckers will often follow their spouse around the home taking the discussion from room to room. Woodpeckers should agree to back off and solve things in stages.

It’s time to understand yourself and your spouse better. Who’s the woodpecker and who’s the turtle? Take the quiz to begin your discussion on how you can better recognize your mate’s personal style and then more effectively resolve conflicts in your marriage. I would love to hear from my fellow woodpeckers—well, turtles too of course!